Our Animals Tack Shop Group Visits Work with Us Contact Us

We have one bearded Dragon called Cheryl.

They can tell us how happy they are by their colour; if they’re very grumpy they will go very dark in colour!

We have two Herman Tortoises: Crush and Squirt.

Crush got her name due to the messy shapes of her shell.

Hermann's tortoises are one of the most popular species of tortoise to keep as pets.

We have 3 baby leopard tortoises called: Shelly, Sheldon and Michelle.

The leopard tortoise, native to South Africa, Ethiopia, and Somalia, is one of the largest tortoises. It gets its name from the markings on its shell.

Corn snakes are native to the south-eastern United States.

The marks on their bellies are different on every snake this can help to tell them apart.

They are native to north western Africa and Asia.

Zippy our Berber skink loves to sit on our keepers’ heads. 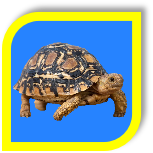 Crested geckos are arboreal, meaning that they like climbing trees and shrubs in their natural environment. Crested geckos have sticky pads on their toes which allows them to climb smooth surfaces, including glass.

Males are distinguishable from females due to the large bumps behind their head known as prenatal humps. They hiss when they feel they are in danger by exhaling air through their spiracles which are breathing holes on the abdomen.

The females are wingless only having small buds, where as the males are fully winged and able to fly.

Both sexes, when threatened, adopt a threat pose, standing on the front and middle legs, pointing their abdomen up or to the side in a sort of "scorpion" pose.

Giant African millipedes originate from the lowland forests of East Africa where they live on the forest floor under leaf matter and rotten wood.

On the seventh segment male millipedes appear to have a pair of legs missing. 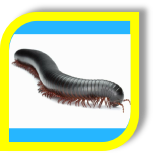 The Asian forest scorpion is found on the rainforest floor, beneath logs and other debris as shelter.

They are native to India, Indonesia, & Malaysia and can get to 5 inches in size.

When this stick insect walks, it often walks in a wobbly or shaking fashion. It does this in order to look more like a twig, moving in the wind.

Sun beetles are medium-sized beetles that live in tropical Africa. They have a yellow with brownish-black front wings that can be seen on its back.

These beetles feed on ripe fruit such as bananas and can fly surprisingly well!

Leaf insects use camouflage to take on the appearance of a leaf. They do this so accurately that predators often aren't able to distinguish them from real leaves.

To further confuse predators, when the leaf insect walks, it rocks back and forth, to mimic a real leaf being blown by the wind.

We have one Chilean Rose Tarantula called Rosie.

The Chilean rose tarantula is a carnivore and eats insects and small animals. They are often found in the deserts and dry scrub lands of South America. 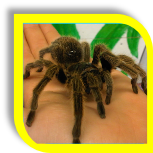 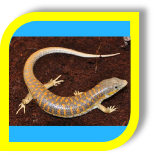 Giant day geckos are a very active and colourful species from the tropical and sub-tropical regions of Madagascar.

They are diurnal which means that they are active during the day. 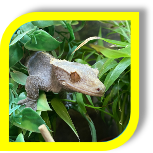 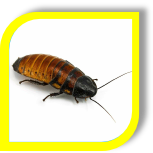 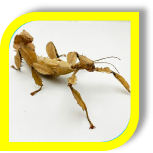 On average they live for about 5 years.

The Mexican red-knee tarantula is one of the most docile and calm tarantulas.

Females live on average 20-30 years where as males live for an average of 10 years. 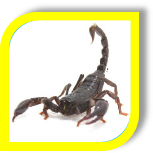 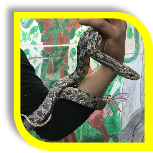 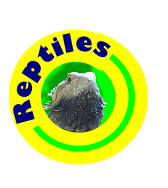